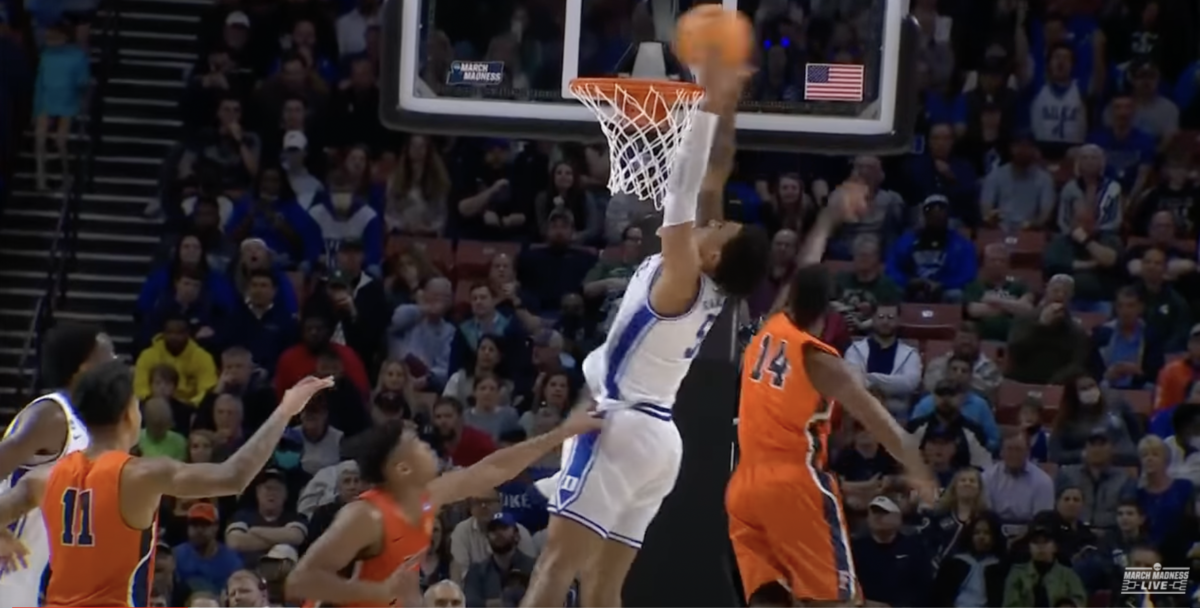 This is the second installment of a series breaking down the potential selections for the Sacramento Kings with the No. 4 overall selection in the 2022 NBA Draft.

The 2022 NBA Draft is just 17 days away and it’s time to start getting serious about potential prospects for the Kings at the No. 4 pick.

First up on the list was Gonzaga’s Chet Holmgren, who we profiled on Friday. Next on the docket is Duke big man Paolo Banchero, who is scheduled to go in the top three and no lower than No. 4.

There are some pretty big gambles early in the 2022 NBA Draft, but Banchero is not one of them. The Duke star is a full-grown man at 19 and his skill set should translate almost instantly to the next level.

In his lone season at Duke, Banchero posted 12 double doubles and scored 18 or more points in 20 of the team’s 39 games. He also failed to score in double figures just twice and he scored a career-high 28 points against Citadel.

Banchero is scheduled to go in the top three, but there is a chance that a player like Jaden Ivey moves up and pushes someone down to the Kings at No. 4. In a strange twist, Paolo’s mother, Rhonda Smith-Banchero, was drafted by the Sacramento Monarchs in the third round of the 2000 WNBA Draft. She played nine games for the team in her lone season in Sac.

Banchero is a grown man. He’ll step into a starting lineup for whatever team lands him in the top end of the draft, whether that’s in Orlando, Oklahoma City, Houston or Sacramento.

Known as a gifted scorer and playmaker, Banchero projects as a potential 20-10 power forward that a team can run their offense through. Close to a three-level scorer, Banchero will need some development time to refine his game, but he should be a Rookie of the Year candidate and likely the odds on favorite to win the award.

More of a bulk scorer than an efficient one, Banchero isn’t shy. He has a solid face up game, is strong enough to take his man off the dribble and likes to stop and pop. His jumper is smooth and repeatable, although an NBA strength and conditioning staff will tighten him up.

Banchero shot 33.8 percent from 3-point range at the college level, but that number could go up when he sees more catch and shoot opportunities playing off the ball. He has a refined stroke and is extremely effective from the short corner. Of his 44 makes from 3, 34 were off the catch and shoot.

Outside of his ability to score, Banchero is a big-time passer. He averaged 3.2 assists per game in his one season at Duke and projects as a solid setup man in the pros and potentially even an offensive hub.

Banchero’s rebound rate isn’t where it should be, especially on the defensive end, but he has a knack for grabbing the board and looking for an outlet. There is potential for improvement in this area due to his size and strength, but he’s not a player who rebounds outside of his zone.

On the defensive end, there are concerns, but his tape isn’t all bad. He has an ability to absorb contact in the post and looks like a reasonable man-on defender down low. He also moves his feet well on the perimeter, although there are some pretty substantial concerns about his ability to do this at the next level.

Banchero is a good, but not great athlete. He has a big body, especially for a 19-year-old, but he’ll need to work on his strength and agility against the world’s greatest athletes. He also has an issue losing weight during games, which is something to look deeper into.

On the defensive end, there are issues. At the college level, Banchero held his own, but there are concerns that when the players are quicker and stronger, he won’t be able to keep up.

He isn’t a natural shot blocker, which is an issue playing alongside Sabonis and there might be some struggles against more mobile stretch fours. Of his 36 blocks at Duke, many were as an on-ball defender and there were more than a few that just aren’t sustainable at the next level.

There is a chance that Banchero can be a league average defender for his position and he may even be able to play the five in certain situations, but he’s not a game changer on this end, like he can be on the offensive side of the ball. He also fits better with a conventional rim running, shot blocking big man, like his frontcourt partner Mark Williams at Duke.

In addition to the potential shortcomings on the defensive end, Banchero is only an average rebounder for his position. His defensive rebounding percentage was just 19.1, compared to Chet Homgren’s 28.7 percent. Banchero’s offensive rebounding rate of 6.1 percent isn’t great either.

Shot selection is a bit of an issue, which is why Banchero posted a 47.8 percent overall field goal percentage. Instead of catching and shooting, he puts the ball on the floor too often. He also settles for long jumpers more than he should.

While he has passing skills and could be used to run an offense through, Banchero turned the ball over 2.4 times per game. This isn’t obscene for a player who averaged 3.2 assists per game and posted a usage percentage of 27.5 percent.

Duke was loaded with talent, including Williams, AJ Griffin, Wendell Moore and Trevor Keels, who are all expected to be selected in the upcoming draft. Banchero was the leader of the group, but there were definitely times where they didn’t have great chemistry. Talent and coaching carried the Blue Devils deep into the tournament.

This is a tough one. There is a possibility that Banchero develops into an NBA average 3-point shooter and improves on the defensive end. There is also a chance that he becomes a super high usage player that takes away from De’Aaron Fox and Domantas Sabonis.

Banchero is going to score and to a lesser degree, rebound. Of the top end players, he might be the one with the highest floor. How that would work out in Sacramento is just tough to wrap your head around.

He isn’t the natural shot blocker or defensive stopper that the Kings could use. He also isn’t the 3-point sniper that they desperately need. He has the potential to be a No. 1 or No. 2 scoring option for a good team, but that will take time.

Jabari Smith Jr. and Chet Holmgren would be better fits with the current Kings roster, but Banchero is an NBA-ready scorer with major passing skills and room to grow. If somehow he slips to No. 4, his talent is too much for Monte McNair and his front office to pass on.