Prospect profile: How would Chet Holmgren fit with Kings? 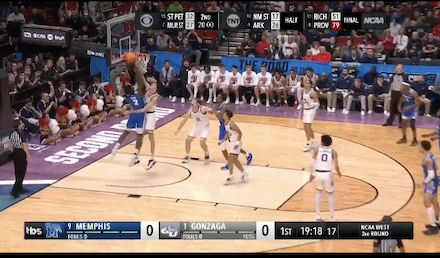 This is the first installment of a series breaking down the potential selections for the Sacramento Kings with the No. 4 overall selection in the 2022 NBA Draft.

The 2022 NBA Draft is just weeks away and it’s time to dig deeper into some of the prospects that could become available to the Kings if they stay at or near the No. 4 overall pick.

A pivotal point in this year’s draft, the No. 4 pick puts the Kings in a position of power. They will have options, including trading up, moving back, trading out completely or just standing pat and waiting to see who falls to them.

These options might seem obvious, but there is a big difference between trying to move up into the top two from the No. 7 pick, versus the No. 4 pick. This is also the first point in the draft that might be available via trade, with three rebuild teams in the Magic, Thunder and Rockets all sitting above the Kings.

First up on the list is Gonzaga’s Chet Holmgren, who is scheduled to go in the top two and no lower than No. 4.

Call him a unicorn or maybe a pegasus? Holmgren might be the most polarizing pick in the top end of this year’s draft. Gifted with incredible height and length for an NBA power forward, the Gonzaga product can do just about everything on the court.

He will take time to develop, but it’s not often you see a player come into the draft with this type of skill set. The consensus is that he will go either No. 1 or No. 2 overall, but there is always a chance he slides slightly on draft night.

If the Kings want to secure Holmgren, they need to be aggressive. A move to No. 2 would likely cost the Kings a top five protected pick in the 2023 NBA Draft, but the reward could be a franchise cornerstone.

Despite his wiry frame, Holmgren is known more for his ability to lock down his opponent than any other aspect of his game. In less than 27 minutes per game, the freshman big man blocked an incredible 3.7 shots per game, which equates to roughly five blocks per 36 minutes.

He has an ability to track his man in space, take contact, remain vertical and use his monstrous 7-foot-6 wingspan to deter shots. Whether it’s man-on or as a help defender, Holmgren is an elite shot blocker and this skill will directly translate to the NBA game.

Holmgren has already shown an ability to defend the pick-and-roll and he is solid on the perimeter due to his incredible length. He isn’t super quick on his closeouts, but his length forces his opponent to rush shots, at least at the college level.

It is likely that he is the best defensive player in this year’s draft and there is potential for him to be an All-NBA defender down the line.

During his freshman season in the WCC, Holmgren averaged 9.9 rebounds per game, which translates to roughly 13.2 boards per 36. He’s a big-time defensive rebounder, posting a defensive rebounding percentage of 28.7 percent. He’ll need to add weight and get stronger to duplicate these numbers at the NBA level, but there is hope that he can average 6.5-8 rebounds per game early in his career.

One of Holmgren’s strong suits on the offensive end is his ability to rebound and either find the outlet man for a transition bucket or lead a break with his ball handling skills. Whether he’ll be allowed to act as a primary ball handler in transition early in his career is a question mark, but the Kings allowed anyone wearing a uniform to take off and lead the break last season.

There is hope that Holmgren will develop into a strong passer at the next level and he may even be able to be a hub on the offensive end. Don’t let the 1.9-to-1.9 assist-to-turnover ratio fool you. He can see over the top of defenders and has shown the ability to find cutters and lob targets. Worst case scenario, he can be a secondary playmaker and he can likely do this from the post position, at the elbow or behind the arc.

As a scorer, Holmgren is a work in progress. There is potential for development in this area, but he may never become an elite first or second option at the NBA level. For now, he is incredible at the rim. Like, he doesn’t miss in the circle, in part because his standing reach is near or over 10 feet and he has an ability to score with either hand.

Holmgren also shoots 39 percent from 3-point range and he is especially effective as a trailer from the top of the key. He’s crafty on the perimeter and has a good handle and face up for a player of his size. There is potential for him to at least create space for himself as a shooter early in his career, with possibility for more.

This is one tall drink of water, but the Kings might not be able to open the glass windows on the front of Golden 1 Center for fear that Holmgren could blow away. At 7-foot, 195 pounds, Holmgren is beyond thin and while he will get an NBA training staff working with him and a nutritionist jamming him full of calories, there is no guarantee that he will be able to put on sustainable weight, especially early in his career.

There hasn’t really been a player built exactly like this. Evan Mobley came into last season at 6-foot-11, 210 pounds, and he dominated as a rookie. The two have similar frames, but 15 pounds means a lot and Holmgren doesn’t have Mobley’s raw athleticism. Aleksej Pokusevski measures in at 7-foot, 190, but he’s more of a guard and he’s struggled to find himself at the NBA level.

On the defensive end, Holmgren has shown the ability to fight and hold his own against larger players. He battled Jalen Duren and came out on top in Gonzaga’s win over Memphis, despite being outweighed by 55 pounds. There were moments when Paolo Banchero, who again outweighs Holmgren by 55 pounds, was able to power through the 7-footer, which is likely a better comp of the type of player he will be asked to play at the NBA level.

Everything comes back to weight and strength with Holmgren and we won’t truly know how his game translates until he’s on the floor in an NBA arena. Can he fight through screens on the perimeter? Will he recover and block shots with the same frequency when players are bigger, faster and stronger?

Despite these questions, Holmgren is considered one of, if not the best defensive players in this year’s draft.

On the offensive end, Holmgren will need to continue to develop his ball handling and play making skills if he hopes to be more than a 3-and-D stretch four. He should be able to crash the boards to create some offensive rebounding opportunities. He’s a smart player who can play off the ball and has shown a knack for cutting, but he isn’t a pure creator, either for himself or others.

The passing skills will likely develop, but he’ll need to get stronger to both establish position on the floor and fend off multiple defenders. Holmgren is a dominant finisher in the pick-and-roll, but his screens are not NBA caliber, which could be a problem.

Lastly, Holmgren has a tendency to disappear in games, especially when he isn’t part of the game plan early. The 20-year-old scored 20 points or more just six times with a high of 23. The Bulldogs have plenty of other scoring options, but he was a non-factor too many times, including six contests where he failed to score in double figures.

On the positive side, even if Holmgren didn’t post big scoring numbers, he still managed to be impactful on the defensive end, where he blocked at least one shot in 31 of his 32 games with the Zags.

Out of all of the players at the top end of the draft, Holmgren might be the perfect fit next to Domantas Sabonis and De’Aaron Fox, if his game translates.

His length and shot blocking ability would instantly improve the Kings’ porous defense. His ability to space the floor with the long ball would open up running and passing lanes. His rebounding potential could push the Kings into the top tier of the NBA on the glass.

A year or two down the road, Holmgren might be able to develop into a Sabonis-like passer and give the Kings a secondary offensive hub to play through. He also might develop as a scorer and become a reliable second or third option.

Like every prospect in the draft, there are question marks, but this is an extremely high IQ basketball player with a skill set that matches almost all of the Kings’ needs and would likely slide right into the starting lineup at the four on day one.

The biggest question is whether or not the Kings can find a way to move up to No. 2 in the draft to land him, or if he somehow tumbles a few spots and falls in their lap at No. 4.