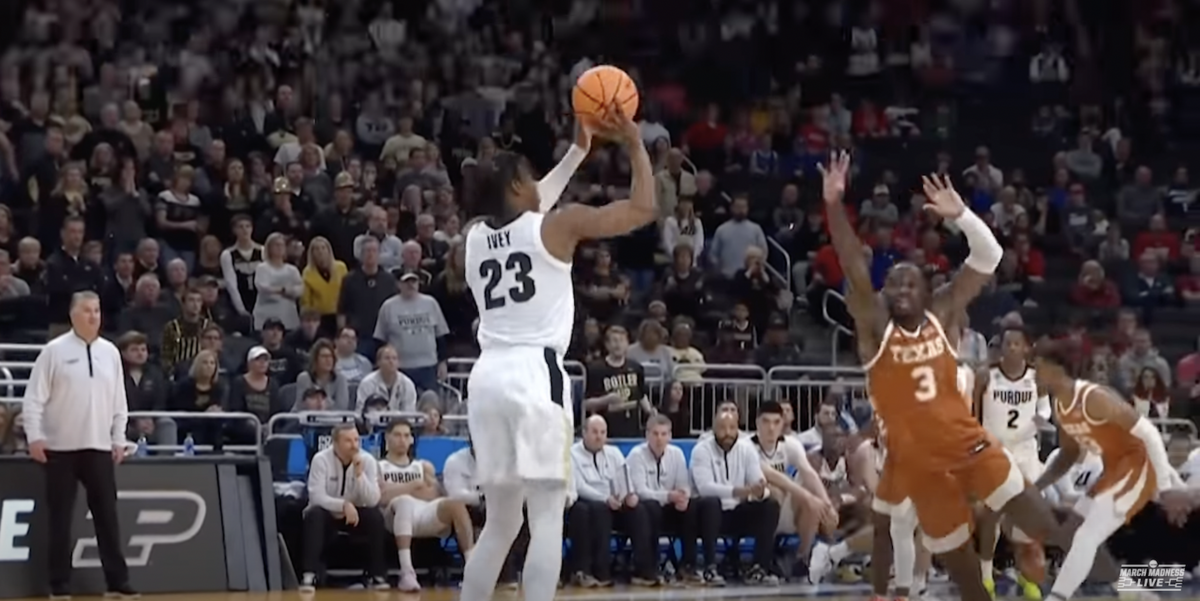 In the latest ESPN mock draft, the write up on the Kings still lists Purdue's Jaden Ivey as  as the selection for the Sacramento Kings at No. 4, but the blurb on the pick has a suitcase full of information to unpack. 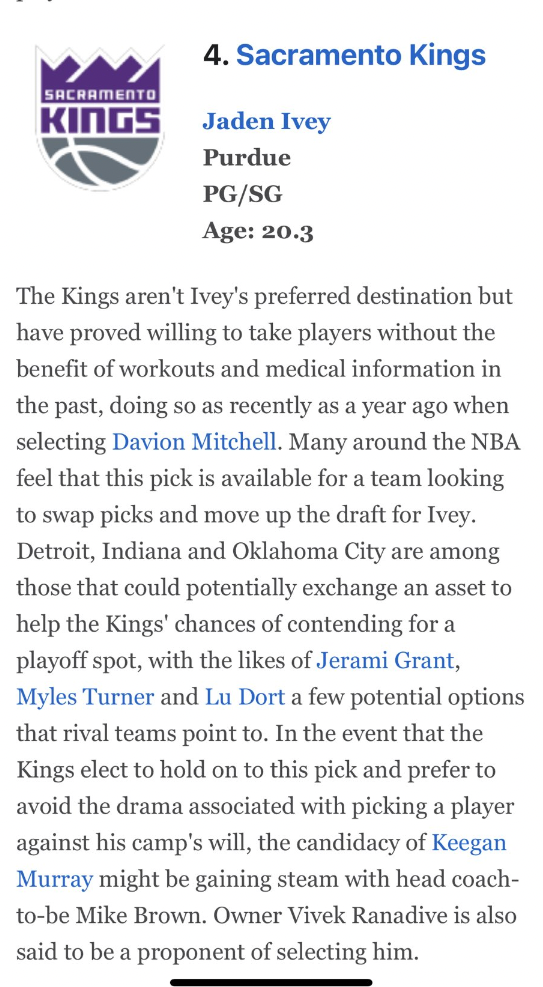 There is a lot to take in from the article, but the last line echoes through your head four or five times before escaping through a roll of the eyes.

“Owner Vivek Ranadivé is also said to be a proponent of selecting him.”

This line is not in reference to Ivey, but to Iowa’s Keegan Murray, who has climbed up draft boards and is expected to be either the first or second name called after the top four in the 2022 NBA Draft.

But this brings us to a larger discussion. What is the quickest way to rile up the Sacramento Kings’ fan base?

Name dropping the owner isn’t new in Sacramento. Ranadivé's name was all over the coaching search and it has been all over so many other decisions during his nine-year tenure as owner of the Kings.

Ranadivé is a voice in the room. Over the last few months, his perceived influence on decision making has taken a hit, with the Kings front office typically going in a different direction than the owner’s reported interests.

In this instance, there is another sentence that adds a lot of context to the discussion that gets slipped in.

“In the event that the Kings elect to hold onto this pick and prefer to avoid the drama associated with picking a player against his camp’s will, the candidacy of Keegan Murray might be gaining steam with head coach-to-be Mike Brown.”

There are some layers to this onion. First up, these three words --  “his camp’s will” -- stand out. The word “might” is also a choice.

By reading this blurb, it’s pretty clear that Ivey’s representation would like him to be, at worst, the No. 4 overall pick. They would also like that pick to be made by someone other than the Kings.

CAA, the group that represents Ivey, is very good at getting their client to what they believe is the best possible situation. In no way is this a jab. This group is excellent at their jobs on multiple levels, which is one of the reasons why their client list is a who's who of NBA millionaires.

They accomplished this with Tyrese Haliburton during the 2020 NBA Draft, even if the end result was him being traded to Indiana in year two.

Either way, they helped Haliburton find a spot where he was able to showcase his skills and prove that he was a legitimate NBA starter with upside for much more. Haliburton is now the centerpiece to a Pacers rebuild and he will be paid accordingly in the coming years.

That is the point of this exercise for NBA agents. When they land a player in a place where they can shine, they, along with their players, reap the long term benefits.

At this point, Ivey is a rough fit in Sacramento. That is one of the key's to why the Kings "aren't his preferred destination." His skill set is very similar to De’Aaron Fox’s. His weaknesses as a player also align with Fox’s weaknesses.

Ivey could work with the Kings, but the path to maximizing his potential is likely with another team. If he is the player that falls to the Kings at No. 4, they could very well look to trade down a spot or two and acquire additional assets, but it takes two to tango and passing on a potential star at the top of the draft due to fit is a recipe for disaster.

For now, this is nothing more than your standard draft intel. Critical thinking must be used every step of the way. The draft is eight days away and we are bound to see more and more information like this as we careen toward June 23.

Rumors and innuendo about who wants to play where or which prospect the Kings' owner is intrigued by mean very little. It's part of the NBA Draft theater and we are just about to enter the third act.

It should be noted that despite this intel, ESPN still has Ivey going No. 4 to the Sacramento Kings.

Nothing is decided. Nothing is off the table. No one has a true read on the Kings' plans.

We've added the Kings Beat fire and ice t-shirt to the mix at the merch shop!  Here is a 15% off promo code for the merch shop: KBPOD 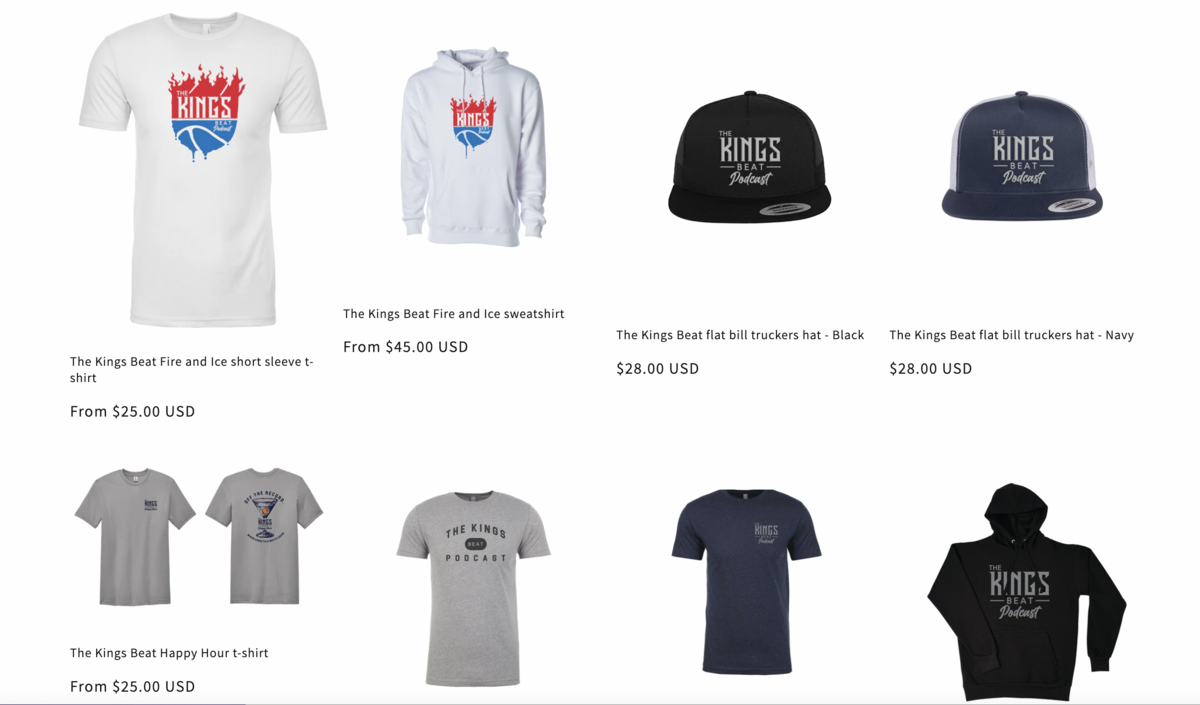