Marvin Bagley is lost in limbo. What's next for the Sacramento Kings big man?

Bagley out of rotation in Sacramento. What's next? 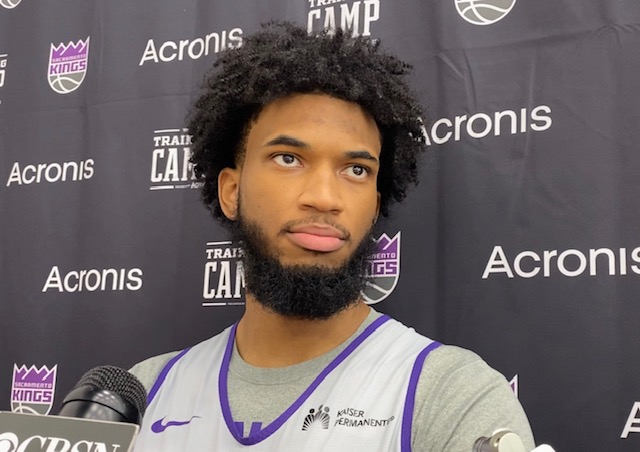 Sacramento Kings training camp was different this year. There was a positive vibe and the energy in the building was different.

As the team wrapped up camp and boarded a plane for Portland on Tuesday, a fireball of chaos dropped from the sky, landing directly on the Kings' organization.

“Sacramento has informed Marvin Bagley that he is not in the opening night rotation, which is completely baffling,” agent Jeff Schwartz said in a statement on Excel Sports’ official twitter feed. “It’s clear they have no plans for him in the future, and yet, passed on potential deals at last year’s deadline and this summer based on "value." Instead, they chose to bring him back but not play him, a move completely contradictory to their “value” argument. This is a case study in mismanagement by the Kings’ organization.”

Bagley, who did not receive a rookie scale extension before Monday’s deadline, was at practice on Tuesday. Like the rest of the team, he seemed to be in good spirits. He played shooting games with Davion Mitchell, De’Aaron Fox and Tyrese Haliburton and could be seen laughing and having a good time with his teammates.

Bagley already knew about the Kings holding him out of the rotation well before the events of Tuesday. It's likely his agent did as well.

What we do know is that this is a very complicated situation that requires a deep dive.

How did we get here?

Bagley’s tenure with the Kings never got off the ground. Taken with the no. 2 overall pick in the 2018 NBA Draft, the 6-foot-11 power forward out of Duke has struggled to stay on the court.

The fact that he was drafted ahead of NBA All-Stars Luka Doncic and Trae Young only compound the situation in Sacramento. Bagley is known more for who he is not than who he is at this point in his career.

During his first three seasons, Bagley played a total of 118 out of a potential 226 games, including 52 starts. Bagley has missed time with a myriad of injuries, including knee, foot, thumb and hand injuries.

In addition to lost court time, Bagley’s father, Marvin Bagley Jr., has taken to social media multiple times to either demand more playing time for his son or request a trade. The requests came in his rookie season and have been a constant throughout his tenure with the Kings.

Bagley amplified his father’s demands over the summer, requesting a trade, both privately and publicly, from Sacramento leading in to his fourth NBA season.

According to league sources, the Kings tried to trade Bagley at the trade deadline last season and couldn’t find a deal that made sense for the franchise. They went into the summer with the plan to move on from Bagley, but once again, failed to find a trade that moved the needle.

Bagley missed time during training camp and the preseason with knee soreness, but he is healthy and ready to start the season.

Entering his fourth NBA season, Bagley was eligible for a rookie scale extension until 3 P.M. PST on Monday afternoon. When no contract was announced, it set in motion a complicated set of circumstances.

In a nutshell, this might be one of the biggest reasons Bagley is out of the rotation to begin the season, although we’ll get to a few other reasons soon enough.

At this point, Bagley and his $11.8 million contract for this season is difficult to move because any team that takes him on, plays under the same set of rules listed above.

If a team wants to take a low-risk high-reward gamble on Bagley for this season, they are faced with a potential $14.8 million qualifying offer. If they hold him out of the starting lineup, then Bagley’s qualifying offer cuts in half, which may be advantageous to everyone involved.

Why take him out of the rotation?

This is a complicated situation. If we look past the “starter criteria” issue, then Bagley could conceivably play minutes for the Kings, as long as he doesn’t start or reach the 2,000 minute plateau, which is a second trigger for the starter criteria.

With Bagley’s history of missing games, that 2,000 minute mark is unlikely, but it only equates to 24.4 minutes over an 82 game schedule. That might not be all that difficult if Bagley remains healthy throughout the year.

In addition to the complexities of his impending free agency, there is another issue in Sacramento that Bagley is dealing with. The Kings’ roster no longer fits his specific skill set.

Harrison Barnes and Moe Harkless will likely begin the season as the starting forward tandem, but both will play substantial minutes at the four when the team goes small. The trio of Richaun Holmes, Tristan Thompson and Alex Len are all better defenders than Bagley and they will share time at the five.

Where do we go from here?

The Kings made their point clear to Bagley and his team. Bagley’ agent responded with a scorching indictment of the franchise.

At some point, Bagley became more valuable to the Kings as an $11.8 million expiring contract. He’s not the first player this has happened to and he won’t be the last. This can change throughout the season, especially if his qualifying offer dips to the $7.22 million figure.

The Kings aren’t going to waive him because they might need his salary later in the season in a trade. They also may have to change plans midseason and rely heavily on the 22-year-old big, especially if injuries hit the squad.

For now, Bagley must do what six or seven other players on the roster are focused on -- work on their game, cheer on their teammates and stay ready for their opportunity.

This isn’t the beginning of the end for Bagley in Sacramento. That happened a long time ago. What we are witnessing now are the final moments of a failed partnership. It could last 10 games or 40 or the entirety of the 82 games schedules, but the path is set.